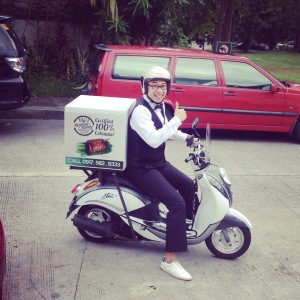 Reeling in from the holidays where the obvious gain in girth remain as evidence, one has to say that some calories were worth more time than others. Christmas is the longest holiday in the Philippines starting off in September and ending with the celebration of 3-Kings in January. There’s just too much indulgence with comfort food that we could actually remain comfortable with.

In extreme cases over the holidays, I shared the table with an old friend who I noted was staying away from the usual indulgence of food and alcohol only to reveal that he had a mild stroke a few weeks prior. Our appetite for food which is amplified along the spirit of festivities could definitely lead us to our end. However this plethora of rich food also brings with it a certain amount of distaste for it. Filipino food during the holidays seem to be biased towards the occasion that brings it to the table rather than the culinary ensemble itself when broken up into pieces. Christmas brings a stark contrast to most Filipino dining tables in a land of feast or famine where the former overwhelms us to forget most of the lean times that passed.

The christmas holidays brings out the pigs from all us in both a literal and figurative sense. During these times we find ourselves eating for the sake of eating. Feasting seems to be a social norm that is hard to pass. Of course when someone brings lechon, both the pig and its bringer seem to be the star! But what is the roasted pig fuss all about? As a matter of fact after one too many parties, I find myself absolutely sick of lechon; especially when we’ve had to contend with its left overs, two ways and two days after the party. Once after, the lean parts are slathered and fried in butter and the rest of it being served as pinaksiw – in which the uninitiated could find himself in absolute horror as he discovers the pig’s jaw complete with its teeth while the others in the same table are fighting over its brain!

I cannot say however that lechon, cannot be good. As a matter of fact, I’ve had some which are as good as good gets. Elar’s lechon seems to be as “good” as we could expect while an “authentic” Cebu Lechon could certainly spin an alternate angle from the roasters down south. Indeed the Cebuanos take lechon very seriously that they would make it a point to turn it into a regional source of pride and international acclaim as Anthony Bourdain experienced and approved. The Cebu lechon pride seemed so contagious that my sister in law’s husband who was assigned in Cebu for a time would go through the trouble of having the lechon flown into Manila via Philippine Airlines; Just so we could be educated!

The lechon was “that good”. It was served neat but highly seasoned with salt, pepper and lemon grass. The best part was the belly which seems to have concentrated and infused the meat with balanced and aromatic treatments. The best test was that the lechon did not need the “febre” or salsa/sauce. The leaner parts however, almost always tasted better when dipped in salt, pepper and vinegar. The experience was always bright, crisp and aromatic.
Push that down with an ice cold refreshing bottle of San Miguel (Pale Pilsen). Please…

However given the romance, I’d venture to say that lechon is lechon. The search for the perfect crackling pig continues. It could come from the distant past Iberian memories brought to us by Señor Armas’ Cochinillo (God Bless his immortal soul); or they may come from North and South in more recent memoirs. Past or present, I would think to be well qualified.

The recent weeks had me partaking Pig’s Face from Pappus a few long blocks away to Ilocos Sur’s famous Vigan Bagnet which we recycled to high heavens as Bagnet Sisig along the beaches of Teppeng Cove. We had the lechon in standard dress, as well as a Northern Iteration of Cebu Lechon belly from La Union! These were all perfect pigs to the crackling, but what really sets something apart was a standout of what an excellent (in superlatives) pig is supposed to be!

As said, lechon is lechon and more about the occasion and the company that brought in its presence rather than the dish itself.

When I had Bai’s Boneless Lechon Belly, the pig was the occasion and not the coincident! So good that I had asked my friend Paul who drove all the way from Marikina into Alabang just to try it. Wrote about it, he did.

So good that I insisted on a December 25 delivery from Dexter Ding (The Proprietor of Bai’s), who by the twist of the arm delivered it himself to feed my foodie family in Alabang where it was served among cooks and Chef! My Kuya Herman just happened to be Executive Chef when he retired from the PGA as well as having been a chef at the Four Seasons.

My feedback was nothing short of an argument with Dexter soon after. As I wanted to decry Bai’s boneless belly as lechon for the many reasons we associate with lechon. There could be good lechon and very good lechon but Bai’s was an excellent Roasted Pork Belly worth writing home about. 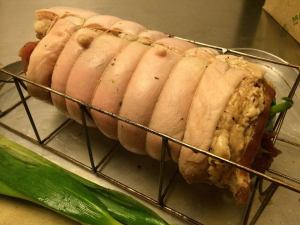 With this writing I am defying his appeal. As tested in proper conditions, I found the flavor complexly layered with sophisticated aromas of lemongrass with a gentle sweet kiss of anise coming from a well founded herbal base. Anise being precarious to use (if it was) as it could anesthetize the taste buds. While the saltiness of typical Cebu lechon could be clocked at 6.5 to a 7, Bai’s can be clocked at a 5.5 on a scale of 10. In contrast to a stark salty season that we associate with typical Cebu Lechon, Bai’s seems to have come from a delicately balanced and fragrant marinade.

Bai’s brings you the best part of the lechon and takes it up several notches up and in different directions with its approach in flavor and sophistication. The mouth feel can be described as firm but tender enough not to lodge grain and sinew; there was none. The skin was a prefect crackling that dissolves in mastication. There was a presence of fat, but none that congealed into pasty lard. It is what lechon “could be” and they’ve done it. 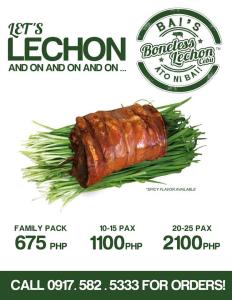 This is not something you should wait on line for at a buffet! I believe it deserves a better place. Perhaps even in smaller portions to be shared on a dinner date with a bottle of wine. The preparation and care involved in bringing this pig to plate can satisfy even the most discerning epicurean. It’s gourmet lechon if there was such a thing?

Well, at least now there is!

Edin is a fully responsive theme that helps you to create a strong–yet beautiful–online presence for your business. Edin's layout adjusts itself depending on the device you are using. This means your site will look good not only on laptop browsers, but also on devices with smaller screens, such as the iPad and iPhone.